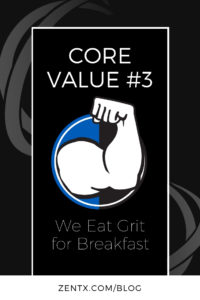 Do you ever have grits for breakfast? That slimy yellowish dish with the sandy texture that also tastes kinda like sand?

If you’re not from the South, then maybe you don’t. But we don’t really either, so there are no hard feelings. There’s a certain “dish” we can recommend for your daily sustenance, though. And it’s not slimy and sand-textured. It’s not even a food at all. It’s a virtue. Around here, we call it “grit.”

Funny coincidence, huh? We were just talking about the breakfast food grits and now we’re talking about grit! You may be wondering if there is even a connection between the two words, the food and the virtue. Well, if you’re thinking that, you may as well also wonder if there is any connection between these two words and all the other uses of the word “grit.” To name a few, that includes the verb “to grit,” the unit of measurement “grit,” and the word “Grits” used in reference to the Canadian political party.

Well, the obvious connection is that they’re all the same word. And, even though they have different meanings, there’s still something in the definitions of each that I think can connect these varied uses together and help us better understand ZENTX’s #3 core value. Hopefully you’re able to guess what that is by now. (Ahem. It’s grit.)

(For a quick overview of our core values, check out our past post about “The Secret Stuff that Makes Companies Thrive.”)

There’s a lot of vocabulary behind the word “grit.” So let’s begin with what every day should start with: breakfast.

“Grits,” as suggested earlier, is just a coarse, porridge-like dish. It’s simple—basically just ground-up corn and water. The name comes from an Old English word, “grytt,” that means “coarse meal.” Pretty straightforward, right? Grits are probably one of the most no-nonsense dishes imaginable. It’s a food for tough people, if you ask me. Kind of like a step up from oatmeal except without the brown sugar, without the oats, and more like cement. There’s nothing crazy, colorful, or particularly tasty about it. It’s just edible, nothing more nor less, and it’s straight-up durable.

Now turning to “Grits.” It’s the same exact word. The first letter is just in a different case, and it refers to not a breakfast dish but to a political party. “Grits” is a term used to refer to the Liberal Party of Canada—a word that you’ll come across in Lucy Maud Montgomery’s children’s book Anne of Green Gables. At first, you might be tempted to think that there’s nothing particularly gritty about a political party. But browse the Wikipedia page for just a second and you’ll learn that this liberal party is actually the “longest serving federal political party in Canada.” That fact shows that this party has some tenacity. They’re no passing fancy. They’re here, and they’re here for the long-term.

The Unit of Measurement

Then there’s a “grit,” a unit of measurement. Folks use this unit to express the coarseness or fineness of the granules on sandpaper. As Wikipedia explains, “The grit size of sandpaper is usually stated as a number that is inversely related to the particle size.” This basically means that the bigger the number, the finer the sanding that sandpaper piece will be capable of. If the number is smaller, the sanding job will be more coarse and bumpy. One of the big distinguishers between high-quality and cheap sandpapers is whether or not the papers use this unit. Less professional sandpapers will only use standards such as “coarse,” “medium,” and “fine.”

And, of course, let’s not forget about the verb. “To grit,” according to Dictionary.com, can be used either with or without an object. When there’s no object, the verb means “to make a scratchy or slightly grating sound, as of sand being walked on; grate.” When there is something being acted on, though, the meaning is “to cause to grind or grate together.” Both with and without an object, this verb implies friction, not ease and smoothness.

Can you store all that in your thought closet? Okay, good. Now we’re going to see how all these words apply the virtue in consideration: grit.

How Grit is Like the Party and the Breakfast Food

If you just turn on your imaginations for a second, it’s easy to see how each of the above definitions add a little something to our understanding of that #3 ZENTX core value. The straightforward definition of the virtue is “firmness of character, indomitable spirit, pluck.” A person with grit, like a dish of grits, is hearty, no-nonsense, and tough-minded (even though he’s not made out of corn and water). You could even say that a person with grit is the most likely type of person to eat grits (and raw vegetables). If grits are a durable food, then it follows that you have to be a durable person in order to get those grits down. That’s the kind of person we like here at ZENTX: someone hearty, like a bowl of grits. (But it’s okay if they don’t actually eat grits.)

Being the longest serving political party in a nation also takes some grit. The fact that a party has earned that distinction suggests that they, like grits the dish, are also durable. Not in the sense that they keep you full after you’ve eaten them (like the edible grits do). Rather, the political Grits are durable in that they’ve endured the test of time in Canada, persevering through history’s changing times all the way from 1861 to today. In the same way, a person with grit isn’t just hearty, no-nonsense, and tough-minded. He, like the party, is consistent and reliable—always there. And not just “always there” in a passive sense but in the most active sense imaginable. ZENTX believes that the person with grit gets stuff done and keeps on getting it done for a long time, like the Canadian Grits. Angela Duckworth talks about this long-term aspect of grit in her 2013 TED Talk about grit. 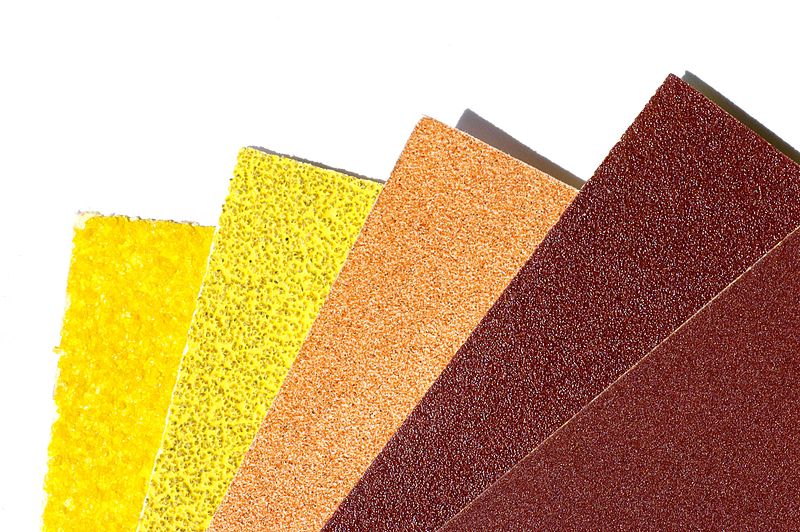 The Other Elements of Grit

And that’s where the unit of measurement comes in. Since sandpapers with coarseness measured by grits are generally the higher-quality ones, we can imagine that grit also has something to do with quality. If someone is always getting stuff done but doing a poor job of it, then who cares how much so-called grit he has? Their C-grade version of grit isn’t worth anyone’s time. That’s why the ZENTX team values grit that, like grit-measured sandpaper, is high quality. Skip the cheap stuff, please. Show us what sort of magic your grit can do.

Finally we come to the verb, an action involving friction—not ease and smoothness. This also tells us a lot about the #3 ZENTX core value. Grit isn’t something for wimps. It’s not something you need in order to finish a bowl of ice cream or pet a bunny rabbit. Having grit in your work means you’re facing resistance. Like the core value tagline says, grit here at ZENTX means that we “break through obstacles and win.” The key to this tagline is the obstacles. A victory hardly ever comes without them. Obstacles are a part of life, and they’re necessary to building up our grit muscles. If a win didn’t require you to grit your teeth a bit to get it done, then was it really worth winning?

The Best Recipe for Grit

To combine all these things we’ve learned, the person with grit is tough. He sticks with a task for the long-term. The products of his work are high-quality. He’s not afraid of some friction. Together, these things make up the perfect recipe for true grit.

Here at ZENTX, the folks with that kind of grit keep working on a job, even when it’s rough. They stick to their tasks like dried grits to a bowl, even when they face obstacles. And, even while pursuing their goals tenaciously, they’re careful to preserve the quality of their work. They don’t just have grit once and call it good, though. Grit is a part of their everyday lives. So much so that they practically eat it for breakfast. That’s why we’re not afraid to accept challenging jobs here at ZENTX. We have employees with the right diet. Even if we’ve never done a certain job before, we always know that we can find a way to make it happen. And we usually do find it, too, because our team has grit. They’re not afraid to fight for a win.

So how about you? What do you eat for breakfast?