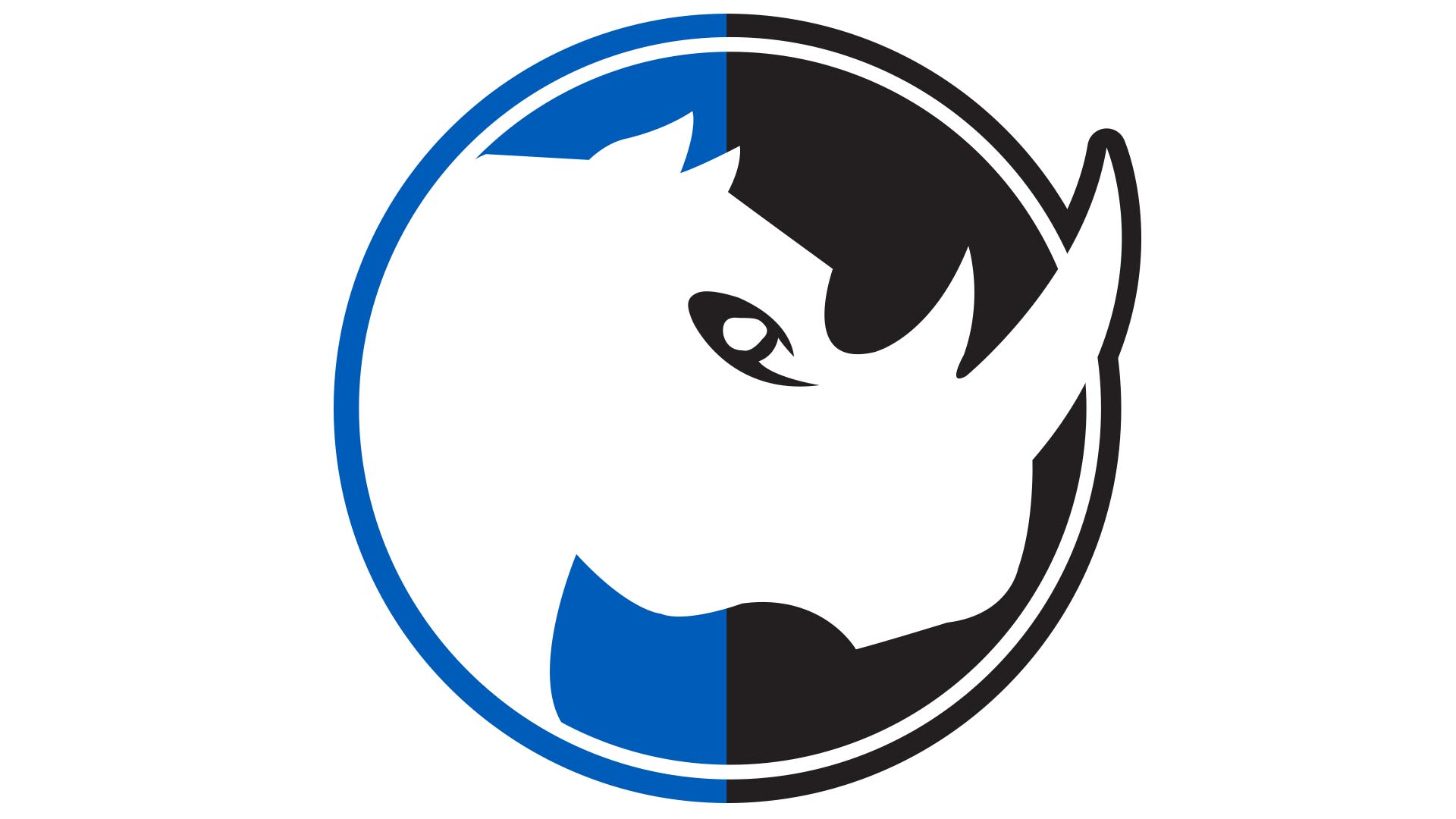 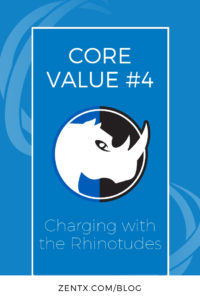 Rhinotude. Strange word, right? Look it up in the dictionary and you’ll find that it’s not there. Try to Google it, and you won’t get much. That’s because it’s not a real word. It’s made up. To be even more precise, it’s a portmanteau. No, not the suitcase kind. This kind of portmanteau is a word made by the fusion of two other words. Like brunch, for instance. It’s just a combination of the words “breakfast” and “lunch.” Get it now? Take out a few letters from a pair of words and delete the space between them and… voila, a portmanteau.

The particular portmanteau we’re dealing with today comes from the combination of the words “rhinoceros” and “attitude.” Inspired by the book Rhinoceros Success by Scott Alexander, ZENTX president Mike Wenz created the word to help communicate the type of positive go-getter attitude that he loves to see in his team members. In essence, as the tagline explains, to have rhinotude means to “work hard, have fun, and charge forward with a positive attitude.”

In today’s post, we’ll be charging with the rhinotudes, so to speak, to unlock and examine the facets of this word. So, folks, hold on to your horses. Err… I mean rhinos. It’s gonna be a wild ride.

Whether you’re writing a paper in school, doing yardwork at the house, or entering data at work, you probably have some sort of ambition to “work hard” at whatever you’re putting your hand to. And so does everyone else. That’s why we’re quick to encourage hard work in others. A mom urges her kids to “work hard” at their homework. A coach praises the team because they “worked hard” during practice that day. You complain about project partners who aren’t “working hard,” leaving you to pick up their slack. It doesn’t really matter what the task is: we intuitively know that hard work or the absence thereof has the ability to make or break the jobs we put our hands to.

But what is that thing, “working hard,” anyway? They’re simple words and we say them so often that they’re almost cliche, but what do they really mean? Well, by itself, the word “working” denotes the performance of some sort of labor or function. When you work, you’re doing something—you’re “acting,” not just “being.” It’s active, not passive.

On the other hand, we usually associate the word “hard” with stationary objects that are physically firm—such as rocks and metal—or with difficult actions that require great effort. One example of the second usage is a “hard” mountain to climb or a “hard” math problem. The mountain and the math problem aren’t necessarily stiff and unmoving in the physical sense, but they’re tough to tackle. When applied to the context of working, however, the word “hard” takes on a combination of these two usages. Not only does working hard mean that you’re acting or doing something in a way that requires firmness of mind (i.e. perseverance) but it also means that you’re exerting energy (whether mental or physical) to make that something happen. This takes discipline and, oftentimes, self-motivation.

This concept of working hard—acting or doing something with perseverance and energy—doesn’t just apply when the work itself is hard, though. Even simple tasks go better when you’re working hard because, more than often, they’re the tasks that require the most self-motivation to accomplish. So, at the most fundamental level, working hard is not about what the task brings to you but what you bring to the task.

Having Fun on the Job

The second element of the Rhinotude definition says simply, “have fun.” It’s easy to assume that this just means throwing a work party every quarter or bringing in a snack to share with your coworkers. But the reality of “having fun” on the job is so much more rich than that.

For sure, as we on the ZENTX team know, there’s really nothing wrong with the occasional costume party or escape room adventure. Or with bringing in doughnuts for the Monday morning meeting or baking cookies to share. Those are fun things, and they have certainly helped us here at ZENTX to build stronger relationships with fellow team members and to form that thing with the illusive French name called “camaraderie.”

But the kind of fun that we’re really talking about is the kind that you experience while you’re actually in the midst of your daily grind, doing the tasks that make up your job. That’s the stuff that is the most important to have fun with. For our fabrication team, that means having fun building things with their hands. To the designers, it means having fun putting together a concept or layout. For the sales reps, that’s having fun while meeting with customers and making sales.

Yes, it’s all still work, and it can get old. But there are so many ways to make even old work fun. You can set goals, make checklists, or reward yourself for accomplishments. People who have fun with their work have learned how to see challenges as opportunities to grow. They’re quick to recognize those challenges as chances to laugh at themselves and ways to grow closer to their team. Sure, these people pay attention to the details, but they don’t let those details distract them from the big picture. They have a bigger view of their career and they know that their job is about more than making money. It’s about so much more. It’s an adventure in and of itself. And, for that reason, it’s something worth enjoying.

No, we’re not talking about ions here. We’re talking about the sort of “charging” that rhinos do, not the kind associated with atoms and molecules. It comes from the last part of the tagline: “charge forward with a positive attitude.”

The concept in this aspect of Rhinotude actually ties the previous two elements together. “Charging” is another way of explaining the acting involved in working hard. Meanwhile, “having fun” on the job helps you cultivate that “positive attitude” it mentions. Have one without the other, and what do you get? Well, without charging, you have someone who’s happy-go-lucky and fun but who doesn’t get anything done. On the other hand, take the positivity away and leave the charging, and you’ll basically have a rhinoceros version of A.A. Milne’s Eeyore. Sounds scary, right? There’s nothing happy about his charging. Or think of the T-Rex in Jurassic Park. When you charge like she does, every other person becomes an obstacle to trample over or a meal to gobble up. And that sort of behavior doesn’t jive with teamwork.

At the most fundamental level, the key to Rhinotude is to view work as a blessing. As Theodore Roosevelt once said, “[T]he best prize that life has to offer is the chance to work hard at work worth doing.” You see, work itself isn’t a negative thing. Some people mistakenly think that work itself is a curse. And sure, the kind of toilsome labor that made slavery and child labor so gruesome and despicable certainly is negative. But work itself and even the act of working hard are not curses. They’re oh-so beautiful and good. They’re a part of what it means to be human. Give that up, and we only stray away from the full truth of who we are.

So, friends, buckle up your rhinoboots (if those exist) and continue your charge, rejoicing in the work you’ve been blessed with. That’s what it means to have that incredible thing called rhinotude.