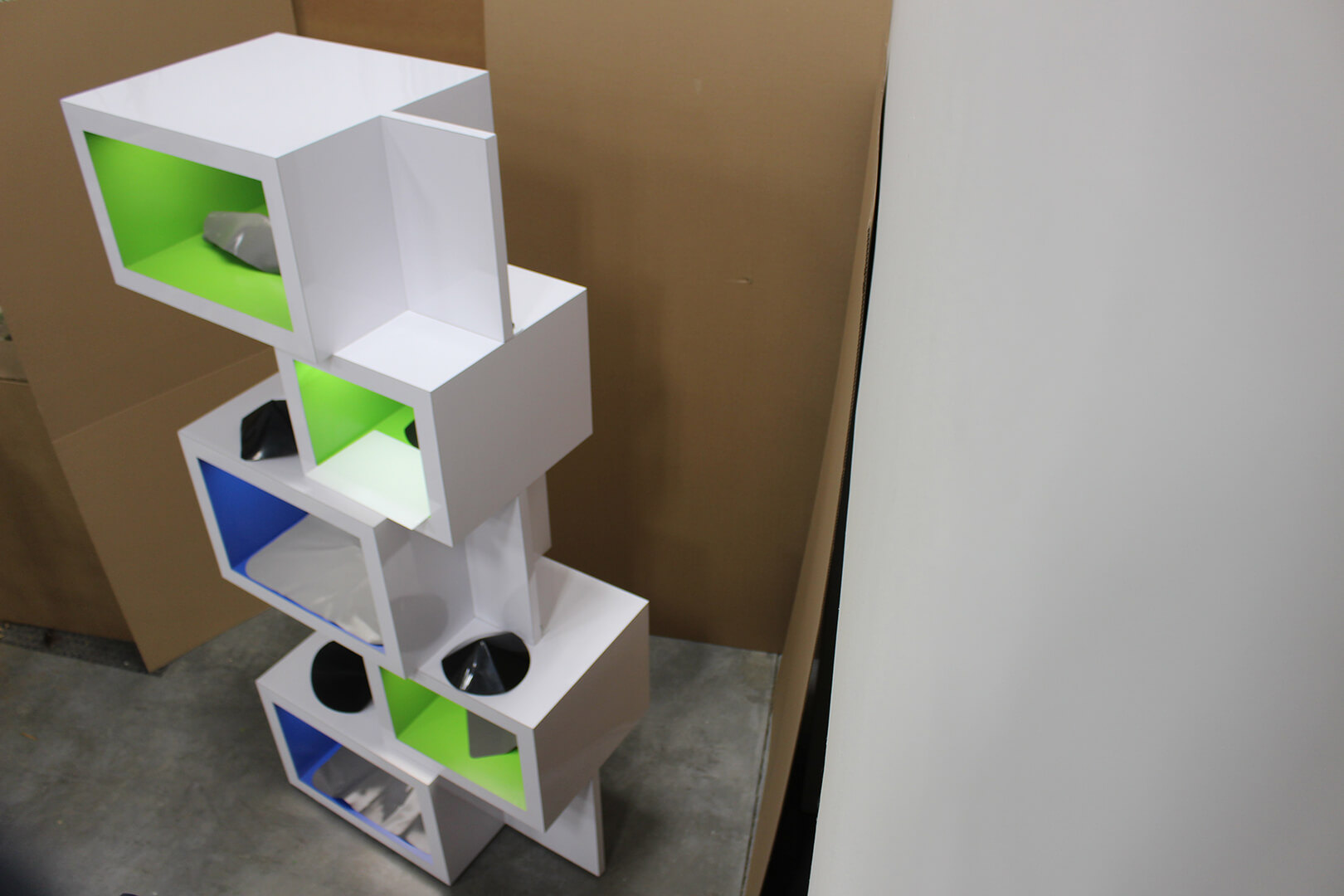 If you’ve never been to a trade show, it can be hard to see how they’re helpful. Giant halls full of aisle after aisle of displays — how can any one company make sure it stands out? Particularly a small company that can’t match the display budget or sales force of larger companies?

That’s the problem our clients at Plastatech faced. Early last February (before COVID-19 canceled trade shows around the world), they were planning to launch a new product line at their industry’s biggest trade show. Naturally, they wanted it to make an impression.

Since Plastatech knew it wouldn’t have the biggest booth at the trade show, it focused on making that booth distinctive. They asked us to design an eye-catching custom display that would make their new products impossible to overlook.

Two of our contacts at Plastatech were kind enough to sit down and talk to us about the project’s impact. You’ve already heard from Mike Rose. Today, Sarah Griffore explains exactly why it’s so important for Plastatech to have a strong trade show booth.

Could you introduce yourself and explain what you work on?

My name’s Sarah Griffore. I’m the marketing accounts coordinator for Plastatech, and I pretty much handle all communications for the company. That can range from literature to social media to the website, just pretty much any content that they would put out to talk about their product or market their company.

And what was your role with this project, exactly?

So [when we started the process of] getting a new trade show display, Mark [Rose] and Jordan [Weichman] came to me. They said, “We want something different. We’re starting to do more 10′ by 20′ booths [and] we need something to take the space up,” so I did a little research and talked to my director about different potential companies. We’d heard of ZENTX, so I’ve pretty much been the liaison between our company and ZENTX in getting the project done. So [handling] any communication that we might need or [going back] to Mark and Jordan, saying, “ok, this is what they need from us now,” and just making sure that as a group, we were meeting the needs of [Plastatech’s] sales team.

How was that process of working with ZENTX, being the liaison?

I think it was easy. [Our account manager,] Sheena, was super responsive to all my calls; I don’t think I ever called her and she didn’t pick up. She was great at keeping me in the loop of things. If I had a question, she was quick to respond or try and get me an answer so I could get it to Mark and Jordan. I feel it was a tight timeline, so being responsive was extremely important

Could you explain how having a distinctive booth helps Plastatech at trade shows?  Or how trade shows in general help Plastatech’s marketing?

So I’m still pretty new to this type of industry, but from the first show I went to, the first thing that stuck out to me is there’s a couple people that [won’t be] ready to talk to you yet. They want to read about your company [first], so you kind of give them a ten-second window to look at your information and say “do I know what this company’s doing?” And I felt that a lot of the people who stopped [by our booth] were still confused.

It is important to have a booth that explains right away, “ok, we do geomembranes, we do these types” — and [one where] you can easily read that you can be in different types of industries, [we don’t] just [make] industry-specific [membranes].

And it also is important to have a big booth because it makes you look more approachable. Especially for Plastatech; we’re a smaller company, we don’t have the biggest sales team in the world, but we have some of the best product, we’re providing great customer service to our clients.

You want a booth that [makes people say,] “Oh, this looks great, I’m just going to stop and see what’s going on,” because at a lot of trade shows, if you look flashy, people typically stop. You’re less likely to stop at the 10′ by 10′ that has one banner.  So having a booth that highlighted our accessories — as Mark said, no one’s really doing these types of accessories, so we wanted something special that makes people stop and say, “What are those, and I want it.”

Could you talk a bit about the custom display that ZENTX came up with, the cubby tower?

To me, that was extremely important, because we could have gone to anybody to get a new burst or a new TV stand. [The question] was how we were going to display this very unique set of products. So the stacked cubbies hold our geomembrane accessories. They have the lighting over top, which shines down [on the products]. Geomembrane accessories aren’t the flashiest thing in the whole world, as I was just saying, so it was important that the thing that held them looked cool.

Because I think the geomembrane accessories are cool, but to get someone [else] to stop, I think the cooler the setup, [the] more likely [people are] to stop.  The [first trade] show that I was at, [I looked at other displays and thought], “None of this is going to work, none of these [displays] would hold an accessory or hold something unique.” [There were] pretty much just literature stands or different boxes that had little gadgets on them.

So when you first saw the booth ZENTX designed for you, what was your reaction?

I was excited at how bright it looked. [On] our one burst that we use a lot, the Plastatech logo is a little bit smaller, and I liked how big the logo [on the new display] was. I thought it looked bright and crisp, and I think it’s going to look really great in our booth space. There’s typically not — the 10′ by 20′ I always think sounds or looks way bigger than you would [expect]. Like in your brain you go, “Oh yeah, that’s a big booth,” because it’s about 200 square feet, but it’s really not that big. And so I think this is going to fill up the space enough and look bright and clean.

Sarah mentioned working with Mike Rose, Plastatech’s sales manager, on this project. To read what Mike thought about the new trade show booth, check out his interview.