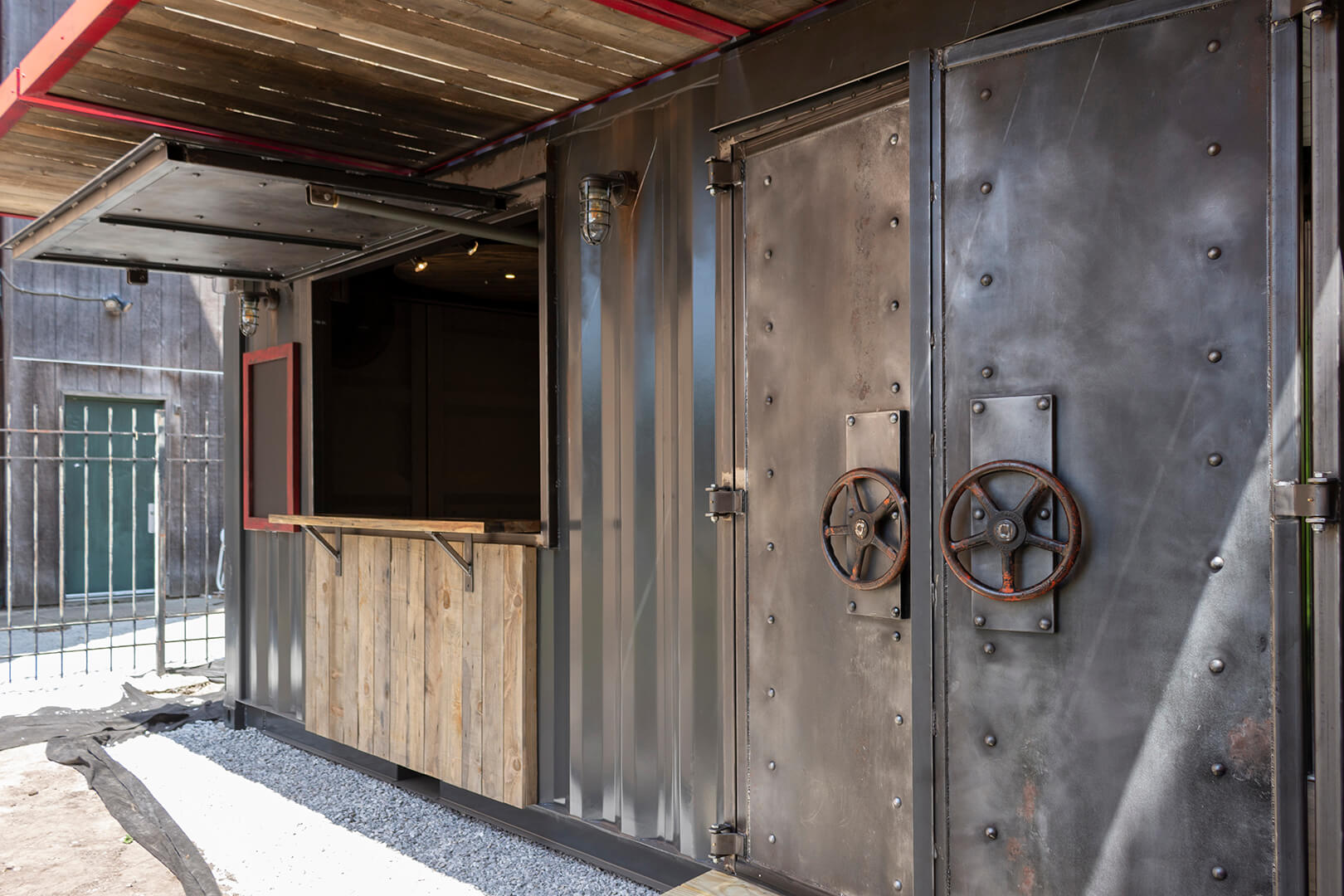 The ZENTX Experience: Talking with Hell’s Half Mile’s Alan LaFave

We talk a lot about big ideas around here. (You may have noticed that.) And as ideas go, they don’t get much bigger than total transformation. The projects we’ve highlighted in our Transformation Stories video series range from that ”complete overhaul“ level of transformation to subtler transformations that affect part of a larger space.

This next one is definitely on the ”total transformation“ end of the spectrum. We took a regular shipping container and turned it into a bar, complete with an industrial aesthetic and nautical name (Drydock) to honor its Bay City location.

What’s even cooler is that ”transformation“ doesn’t just describe how Drydock was made. It also describes what it does. We built Drydock for two nonprofit organizations, Hell’s Half Mile Film & Music Festival and the State Theatre, who will use it to support their missions of bringing independent art to Bay City.

Our latest Transformation Story featured part of our conversation with Alan LaFave, our contact at Hell’s Half Mile. We thought you might like to read the whole interview, though, so here’s a transcript of it. Watch the video if you haven’t already, then keep scrolling to see what Alan had to say about Hell’s Half Mile, Drydock, and how the two fit together.

Could you tell us about yourself and what you do for the Hell’s Half Mile Festival?

My name’s Alan LaFave. I’m the festival director and one of the cofounders of the Hell’s Half Mile Film and Music Festival. The festival is all independent film and indie music from around the country; the films are from around the world.  This is our fourteenth year, and we’ve been doing this in downtown Bay City since the very beginning.

What made you want to start this festival?

Well, in a previous career I traveled around the United States a lot, so I got to see a lot of different communities and what they were doing. But the year that the Traverse City Film Festival started, myself and cofounder Tom Jenkins were up there and we were really just excited about what that festival did for the community and [about] what we could do if we did it for our community and put our own spin on it.  I sort of headed up the film side of it and Tom headed up the music side of it.

So how does Drydock fit in with your goals for the festival?

One of the things nonprofits look for, and especially funders of nonprofits look for, is sustainability. And at Hell’s Half Mile we do a film series throughout the year, but other than that we just have the festival. We don’t have a regular source of income — other than our sponsorships and ticket revenue from the festival. So what we were looking for is something that was a stream of income outside of our normal programming to help sustain us over the years. And we decided to pursue that with the State Theatre, which is one of our partner organizations that we work with for the festival year after year.

Why did you guys pick a container bar out of all the other projects you could have chosen to add to the festival?

The idea sort of came to us as an opportunity. It was something presented to another nonprofit organization that they couldn’t pursue based on their bylaws, and both Mike Bacigalupo from State Theatre and myself are board members of [that organization], so as they shelved it we picked it up and pursued it. It just seemed like a really fun [idea] — right from the very beginning I raised my hand: “Yes, let’s vote to move this forward.” Unfortunately, it didn’t work there; fortunately it worked for us.

It was a really great process. The team at ZENTX has been really incredibly creative and helpful. We asked for a fairly expedited process, which meant we had to really trust them in some of the design and creation, and if we had given more input we probably couldn’t have gotten as great of an outcome as we had. They really put their creativity and their effort into it; the construction is absolutely amazing. We’re really just so pleased with how everything turned out. The team exceeded our expectations with everything as far as producing the piece and placing it and having it run incredibly well.

How’s business been at Drydock so far?

The first week was our grand opening (and also a reveal party for Hell’s Half Mile’s fourteenth program of films), and it went incredibly well. I think the reaction from the community has been fantastic. People just walking by because of its location, even before we opened, were like, “What is this? What’s going on here? What’s happening with this park?” The park [where Drydock is located] is privately owned and has just been left open for the community to use. Now, instead of being a passive micro-park, it’s a very active space.

And it really has been fantastic to see people’s reaction [even] to what we’ve minimally done to the space; we haven’t even finished putting [up] the lights [and] some of the signage.  The space is gonna be developing as we use it.  I think the community reaction to it is going to grow and grow in a very positive way, and for the nonprofits involved it’ll be a great use of the space.