By ZENTX
Aug 03, 2018
in Business Tips,Design,Environments 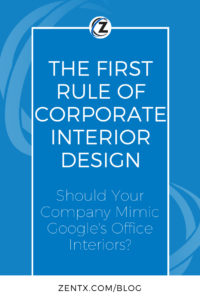 So you’re sensing that your workspace is outdated, huh? Looking for a bit of a resuscitation for your office interiors? Well, good for you. But, before you begin, we need to make sure you’re ready for this. So… pop quiz! What’s the first rule for businesses looking to revamp their corporate interior spaces?

Don’t know? Well, no worries. That’s what this post is here for. First, though—before I tell you what this “first rule” is—let me tell you what it’s not. Before I do even that, though, I have a story for you. So snuggle down, and join me on a trip through the magical world of office interiors.

Once upon a time—oh, let’s say the mid-1900s—someone started the first cubicle farm. This bland, gray, and (yet) unique “agricultural” endeavor absolutely rocked the magical land of corporate environments. Before the first carpet-covered cubicle started growing out of an office building’s floor, the standard workspace used to look something an awful lot like a schoolroom. They may not have always faced the “front,” but companies arranged these desks in large, open rooms. Sometimes in rows, just like your 6th grade classroom. Generally, the average employee would have sat there with no partition separating him from his neighbor. So you can imagine the ruckus in the corporate world when the first cubicle grew from the ideas of this one guy named Robert Propst.

Ironically, Propst had no intent to start a the cubicle revolution with his innovative office layout ideas. But that’s exactly what happened. Soon, cubicles started popping up in workspaces all over the globe. And, by the 1970s and 80s, it became clear that this new office growth was taking over corporate interiors all over the world. It was a regular infestation. And these otherwise unimpressive gray structures were awfully hard to eradicate.

So, the cubicle-farming business spread—happily for cubicle manufacturers and perhaps not-so-happily for the rest of the corporate world. You see, the people who had to live in these cubes soon began to consider the combination of the words “cubicle” and “farm” to be a rather derogatory phrase. It wasn’t something you wanted to have said about your workspace. So, by the 2000s, some people were plotting to overthrow the cubicle farm, that monarch of office interiors. Perhaps it wasn’t all that dramatic, but still. Another shift occurred. The game changed. 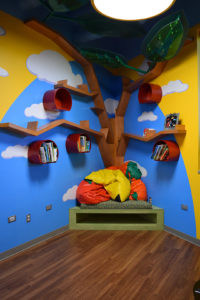 Some of our own Google-like interior work.

One of these “corporate interior game-changers” was a growing business called Google. (Never heard of it? Huh.) Despite its seemingly obscure beginnings in a college dorm and then a California garage, Google wouldn’t stay small enough for those limited quarters for long. Less than seven years after becoming an official corporation, Google had grown to over 800 employees. So, around this time in 2004, they first settled into their current headquarters in Mountain View, California. They call the place “The Googleplex.” And that’s where office interiors went berserk.

As the Googleplex developed, it quickly became clear that Google had no interest in cubicle farming. Instead of cultivating those grayish carpeted faux-walls, Google went for an open-office space. They built in playground slides where any normal business would have just put stairs. They made office chairs out of large rubber balls. And the craziness went on from there.

Over the past 10-plus years, Google offices have continued to look more like playgrounds than places of work. Maybe it’s the hallways fashioned to resemble cobblestone streets or the occasional meeting area made to look like a hot air balloon basket. Or maybe it’s just all of those open areas scattered with pillows and beanbags. Whatever it is, Google offices have become an icon of the ideal workplace to many people in the category of “average employee.” And lots of folks higher up in the business realm recognize Google as the most influential trend-setter in modern corporate design. After all, long gone are the days of prospering cubicle farms. And long gone is the assumption that cubicle farms are an acceptable standard for today’s corporate buildings.

It’s almost like a new assumption has taken over: that, if you want to be the “cool place to work,” your spaces have to look like the Googleplex. Just think. It’s like the old middle school drama all over again. Some businesses go to great lengths to make themselves look like the cool kid (a.k.a. Google), only to find that their company (big shock) isn’t Google and never will be. As they get older and start to regret their attempts at mimicry, they realize that they would have been better off dressing like themselves.

And that, my dear readers, is exactly why the first rule of corporate interior design is NOT “Be like Google.” Don’t fall into that trap. Nah, that doesn’t mean that you have to hold on to the dreary days of cubicle farms and abandon all hopes of creativity. And it doesn’t mean that you can’t take any ideas from Google either. What it does mean is that you need to pursue a corporate interior design that reflects your company culture, not Google’s.

In fact, plenty of the people who actually know a thing or two about corporate offices could tell you that the open-office plan adopted by Google is sometimes detrimental to employee productivity. As with most things, the effectiveness of this layout depends on the specific business in question. And that’s precisely why you need to consider your own corporate personality before trying to conform to Google’s. Find out what works for you and go on from there. Trying to impose a model on yourself without first figuring out what your company needs is like installing windows when you don’t even have walls. Imagine that. You’ll just end up with a lot of broken glass and (might I add) broken hearts. 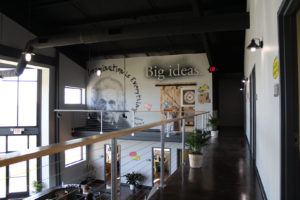 The front of our main building gives visitors a taste of the ZENTX culture.

So now, at last, we’ve arrived at the long-awaited “first rule” for revamping corporate interior spaces. And the rule is as plain and simple as “Be yourself.” No, don’t try to be Google Jr., Apple Jr., or even a copy-cat version of that business down the road from you. Find yourself a team that can help you discover your company’s distinct corporate personality, the quirks and flares that make your company culture stand out, and the best ways to communicate that personality and that culture visually. Don’t let anyone tell you that you need to “be like Google.”

Google made the migration from garage office to Googleplex. Maybe you’re making the migration from cubicle farm to something less carpet-covered. Whatever direction your step will take you, we want to help you make it in the right direction so that, rather than mimicking someone else’s office interior, you can make your offices distinctly you. We love taking otherwise dingy office spaces and infusing them with the colors, the designs, the messages, and the elements that help define a company. (In fact, you can read about some of those elements in our last blog post.)

If you want a hot air balloon basket in your offices—well sure, then. We can do that. In fact, we do crazy projects all the time. But don’t do it just to be like Google. Do it to show something special about your own company. And if that’s not something that fits your corporate personality, then start with something else. Like a timeline or an award wall. Maybe some ceiling hangings or a dry erase wall. We’ve got plenty of experience in transforming work areas. So give us a chance to give your office interiors the transformation of a lifetime. Contact us here or at info@zentx.com. We can’t wait to help you move past those sad days of gray cubicle farming.