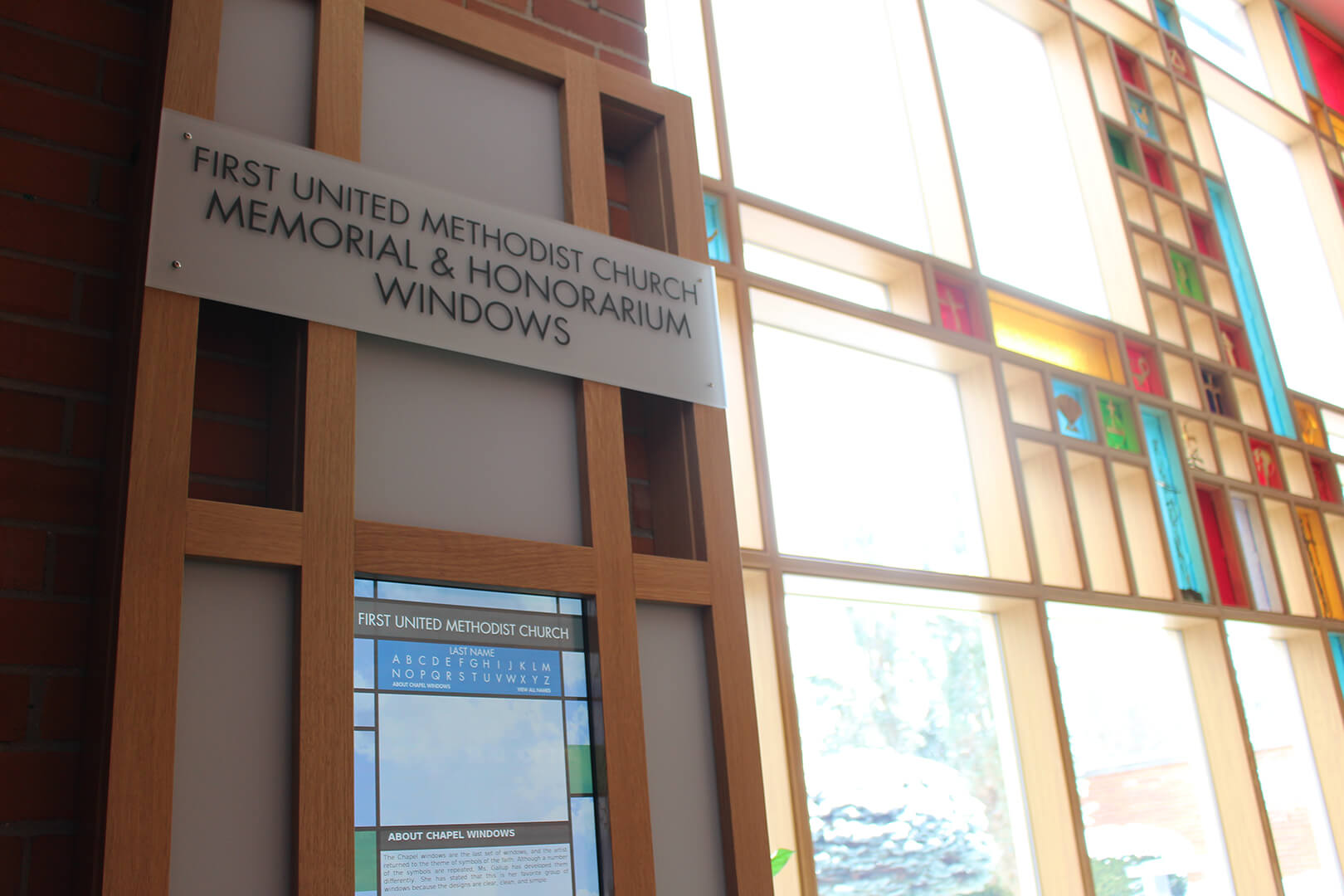 In a town known as ”the City of Beautiful Churches,” Midland’s First United Methodist Church (First UMC) can surely make a claim to being the most beautiful. With its mid-century modern design and its hundreds of miniature stained-glass windows, it’s truly striking.

The building was designed, in fact, by Alden B. Dow, a native of Midland who studied briefly under Frank Lloyd Wright and became a notable architect himself. So when First UMC contacted ZENTX about adding two touchscreen kiosks to their space, we knew the kiosks’ appearance would have to respect Dow’s distinctive style.

The kiosks show respect for the church’s heritage in other ways, too. Although their focus is slightly different, both help honor the people remembered in First UMC’s memorial garden and memorial windows. Each one makes it easier for First UMC’s visitors and current members to learn about their loved ones.

But we’ll let our contact at First UMC, Jon Horton, explain the kiosks more fully. You can hear some of his description in the video linked below, which is part of the Transformation Stories series on our YouTube channel. To get the full scoop, though, scroll past the video to read the transcript of our interview.

First UMC really has a remarkable-looking building. Can you tell us a bit about its history, Jon?

The main sanctuary area we moved into in 1949.  We had the chapel put on the front of our church in 1953, and then we had our office corridor wing and Sunday school rooms put in in 1967.  And this Methodist church has been on this ground for 160 years. They’ve owned the entire block; we used to have a house on the corner of Fitchew and Main Street, and another building that was like the parsonage.

Eventually, once the sanctuary was built, then the other two buildings were torn down. The area [where the welcome center is] now was actually an open-air area to the outside, and part of the design in 1967 was to enclose everything and expand — our church was growing.

Alden B. Dow was the architect that designed our entire building at different stages. Alden Dow was the son of Herbert Dow, and he didn’t go into the chemical industry like his father did; he became a worldwide-known architect and you can pretty much pick up wherever you go if there’s an Alden B. design.

For example, the character of the structure you see here — and it runs throughout our church — that has these windows and lets a lot of light in, is characteristic of not only his buildings but also his houses that he designed, of which there are quite a few within Midland. But outside of Midland, even outside the state of Michigan, there are residences that were designed by Alden Dow.

So then, tell us about why First UMC needed the two touchscreen kiosks.

[Well,] in this courtyard area, this is our memorial garden where people who prefer — their cremains are buried in there. The reasoning behind wanting something like [a kiosk] is, with the history of this [church] being 160 years old, as far back as we could go, all we had were paper records of members that had passed away.

And the use of our memorial garden for interment of cremains was increasing and paper just became very cumbersome, so we decided that this would be something that would be a real advantage.  We have a large plaque that I made, in our office corridor that [has] plates with people’s names and their date of birth and date of death, but like anything else it’s very finite. Pretty soon you[’d] have plaques everywhere and kind of lose touch with what the building was designed for.

So this bit of technology has really been fantastic. There’s a lot of traffic up and down that hallway [by the garden and kiosk], and people can come to that touchscreen, touch a letter, and look for their loved one, or if they want to spend a lot of time, they can go back through history and look at [entries for other members].

And what is the second touchscreen kiosk for?

The second kiosk is in our chapel, and one of the things that we’re known for are our memorial windows. If you look at some of the windows, you’ll see artwork that’s in them. These are all memorial windows that have been installed over the years where people want to remember their family member or [if] there’s an honorarium given.  My in-laws, who are now passed away, have a memorial window that was put in as an honorarium versus a memorial.

When Alden Dow designed this church originally, he designed it with the intent of having fifty memorial windows, so they’re pretty special. We’re over 300 now, it’s like 331.

But the kiosk that’s in our chapel is strictly for identifying all of the memorial windows and showing their particular location and who they are there for — it could be a memorial, could be an honorarium.  Our Wednesday night chapel [service] is held in there, and so [it gets] a lot of use.  We did want it to follow in the same type of design as the first kiosk, and it worked out very well.

If you’d like to read Part One of our interview with Jon Horton, where he discussed the welcome center ZENTX created for First UMC, just click here.