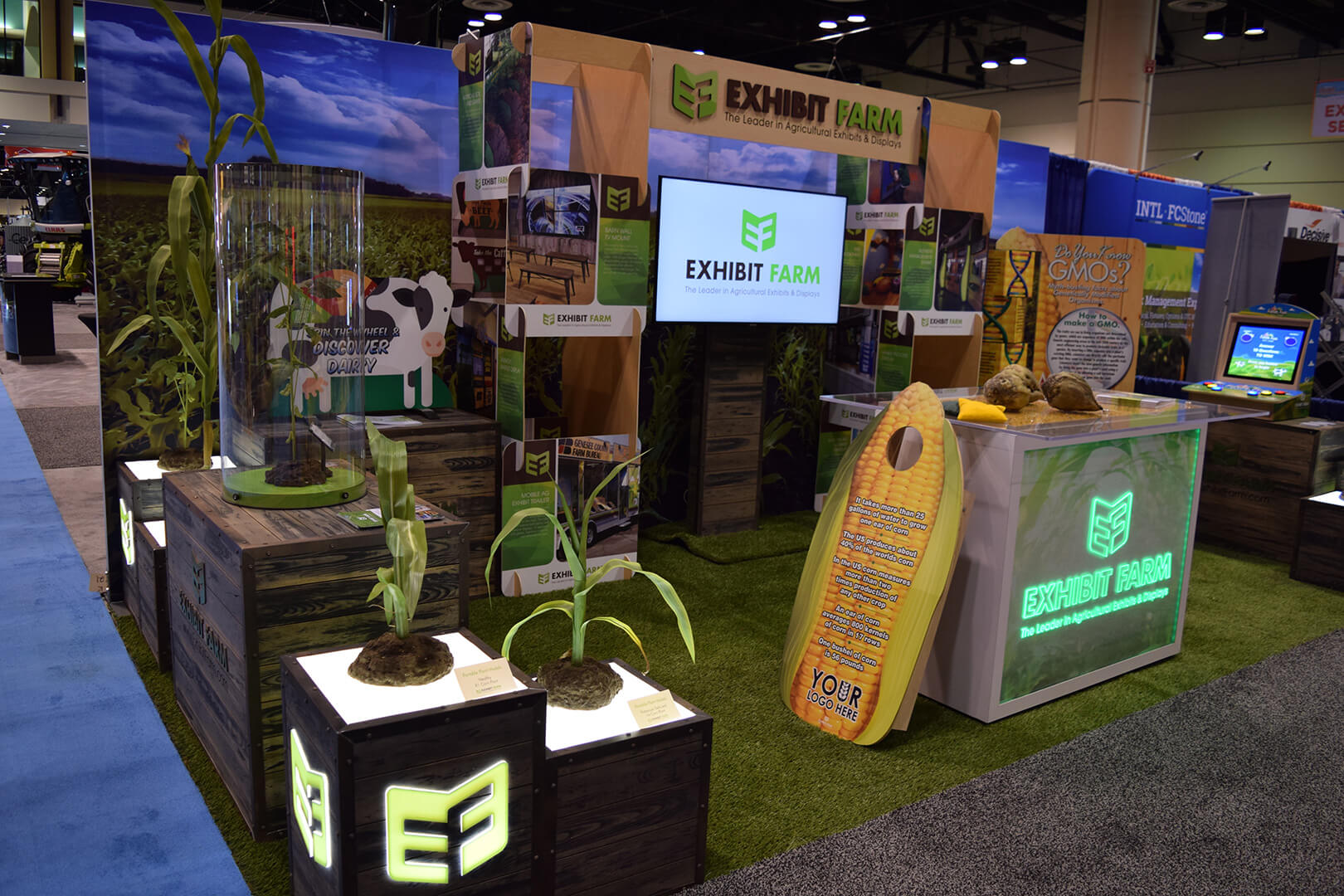 Part 4 of 9 in a series about ZENTX’s history and company values.

Guess what? There are actually two businesses that list their address as 8853 West Freeland Road. But they’re not really two separate businesses: they have the same staff, same owners, same general type of work. There’s just a slight difference in focus, which is why we prefer to call Exhibit Farm a division of ZENTX.

So what’s the difference between Exhibit Farm and ZENTX? Well, think about what ZENTX does. We specialize in large-scale visual elements — signs, wall graphics, big custom projects like shipping container bars or special display cases. Basically, we help other companies tell their story, whether they’re local ice cream shops or national B2B manufacturers.

Exhibit Farm, on the other hand, specializes in one subject: agriculture. (As far as we know, we’re the first exhibit company in the country to specialize in agriculture.) Our clients with Exhibit Farm are often more education-focused than business-focused. But they still want visually-exciting displays to help them spread their messages.

Keep reading to hear Mike and Mark Wenz discuss how they weren’t content to start just one business!

Sowing the Seeds of a New Venture

Mike: We will continue to focus on interior environments. I think we do a good job at that. We still like to build stuff, but we’ve also started this other division of ZENTX called Exhibit Farm, and we really want to try to invest in that.

Mark: Over a couple years, we realized that we were doing more agriculture-type things, and so that’s how that division was created.

Mike: We’ve had all sorts of ideas for web-related type of businesses. None of them really were successful because we never poured resources into them. And so when Exhibit Farm came along, and along with some research that we’ve done, we saw that it was — that it had a lot of potential. And we had a lot of ag-related exhibit stuff that we’ve done in the past, so we had a really good portfolio to start with.

Mark: We started doing more work for different ag-related businesses, and we thought, “Well, this could also be a way to focus in on one area, one industry type, and become better or even the greatest at it.”

Mike: We thought, boy isn’t that dandy, if we could focus on one thing and not be spread out all over the place. That is really the driving force behind Exhibit Farm. It’s a good business model, where we can produce more than one of something but we can still be creative doing it.

Exhibit Farm was something that we could utilize our facility, utilize our people, utilize the skills we had in building ag-related exhibits. So we didn’t have to change a whole lot, but what we did change was our focus.

The Goals of Exhibit Farm

Mike: At least from what we hear in talking to the farm bureaus and checkoff committees and things like that, there’s a need for somebody like Exhibit Farm. And [with us,] they don’t have to go to multiple places.

A lot of them don’t have an idea what they can do with some of the funds they have, so we take out the guesswork and offer ideas and solutions so they can have promotional products that can educate. And that’s the other driving force behind it; we want to continue to promote educational type of tools for the ag-related businesses.

In ten years, I think that side of the business could be really huge, and we’re gonna do whatever it takes to get it there.

Mark: We could become the best, at least in the U.S. — maybe the world, I don’t know — at ag-related experiences or educational products or exhibits. And so with that [right now], we’re just scratching the surface a little bit. We’ve become fairly well-known in this area, for the most part. But, you know, [becoming known] through the U.S. is gonna be a little challenging, right? But we like a challenge.

Check out Exhibit Farm’s website if you want to learn more about its mission. You’ll also find lots of project photos!